The client is lays fully clothed  on a treatment table in a warm safe environment.  Soothing music can be played for further relaxation.  The Axiatonal lines are along traditional acupuncture meridians and feed into spin points that lie near the surface of the body.  When they are spinning appropriately they create a grid for cellular regeneration.   The Axiatonal energy is able to recharge the body and release negative emotional, mental and spiritual patterns.

The Axiatonal Re-Alignment Practitioner will systematically move from your head down to your feet, gently touching on specific spin points along meridian lines.  Then the Axiatonal lines are lightly touched, either on or just above the physical body.

At one time our own Axiatonal lines were connected to the cosmic lattice, however, over time we have become disconnected from these lines.  An Axiatonal Re-Alignment treatment consists of a simple and effective energy method that is used on the client.  Axiatonal lines are worked on, to correct blockages and imbalances on the physical, emotional, mental and spiritual level.  This method aligns the client to the cosmic lattice.

The treatment usually lasts about 30 minutes.

The treatment consists of three parts:

What can you Expect during Axiatonal Re-Alignment Session?

This explanation was taken from the book "What is Lightbody?" by Ariel/Tachi-ren

"The fifth-dimensional etheric blueprint is made up of an axiaotonal meridian system, an axial circulatory system, and spin points through which these systems and structures are connected.

As part of this game of separation, the human axiotonal meridians were cut off from direct connection with the Overself and other star populations. This created brain atrophy, aging and death. Axiotonal lines are the equivalent of acupuncture meridians that can connect with the Oversoul and resonant start systems. 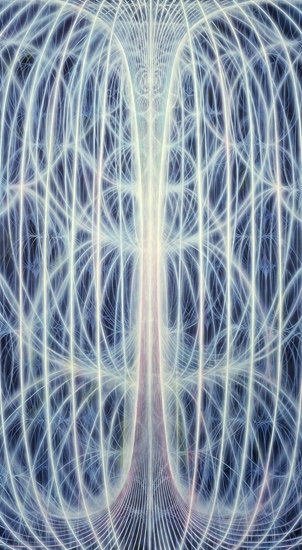 Through the axiotonal lines, a human body is directly reprogrammed by the Overself into a new body of Light. Axiotonal lines exist independently of any physical body or biological form. They emanate from various star systems and are the means by which the galactic body controls its renewing mechanisms. Picture the Milky Way as the body of a living conscious being. The stars and planets are organs in that body; all the different species on the stars and planets are like cells in the organs of the galactic body, renewing the energies of the organs and cells. Planet Earth and her inhabitants were separated from the galactic body and the Oversoul to play this game of separation, and are now being reconnected.

The Axiotonal lines are made of Light and Sound. Once reconnection has occurred, the Overself transmits the appropriate color/tone frequencies to regenerate the physical body into a Lightbody.

The axiotonal lines lie along the acupuncture meridians and connect into some of them by means of the ìspin points in every cell of the body. These cellular points emit Sound and Light frequencies which spin the atoms of the molecules in the cell at a faster rate. Through the increased molecular spin, Light fibers are created which set up a grid for cellular regeneration.

The axioal circulatory system was completely vestigial in the human species, due to the axiotonal lines being disconnected so that this game could be played. It is a fifth-dimensional energy system that connects the spin points on the skin surface to every spin point in every cell. It is a model for physical transmutation and it is being renewed now that the axiotonal lines are reconnected. The axial system pulses energy like the circulatory system pulses blood, but the axial system is basically electrical in nature, like the nervous system. The Overself sends energy into the axiotonal line, which then goes into the spin points on the surface of the skin, feeding the physical acupuncture meridians and then the axial system. As the axial system receives energy from the Overself, it recombines color and sound to realign the blood, lymph, endocrine, and nervous system into the Divine Template, the Adam Kadmon. It also carries the energy Sound and Light to create a gridwork for the renewed evolution of humankind."

Your Comments from A.A. Practitioners Taking the Axiatonal Alignment Course:

"People come back for my Axiatonal Alignments. I like that.  had someone yesterday, who found the first to be "one of the most intense experiences " and opening to awareness they want to go further."  DB